Copic is a brand-name that is intertwined with the values of high quality and precision that all artists who use markers to create appreciate. Manufactured in state of the art production units in Japan, these markers were developed to meet the highest standards, cover even the most demanding needs, and utilize the most pioneering technologies in the field.

Initially launched in 1987, Copic markers have helped fuel the “Manga” artistic movement and essentially reshape the artistic world by driving and inspiring old and new generations towards the use of markers in creation. Since the launch of the original Copic marker, the company has made leaps by releasing three more marker types, and by gradually covering a color range of over 350 distinct and vivid colors. Nowadays, Copic markers are considered to be a symbol for the product category, and a true synonym of top quality. What makes Copic Markers so special?

Apart from offering top quality at an unfathomably deep color range, Copic markers are bringing a whole set of elements that won’t be found anywhere else. Among the many things that make Copic markers stand out against all competition are their unmatched repairability and customization capacity. For example, Copic sells replaceable nibs and refilling ink tanks that allow for unlimited reuse and color re-purposing of a single marker. Moreover, and since the inks can be seamlessly mixed, artists can freely produce their own hues at the desired quantities. The nibs come in several different sizes allowing for both broad line drawing, and niche calligraphy and detailing. Copic markers come as double edged by default, featuring a thin and a thicker nib, so they are quite versatile.

The original model, Copic Classic, features a double-ended design that allows large area coverage and detailed work with the same convenient marker. It can cover the special requirements of a wide spectrum of artistic applications, while it offers premium lay-down rates. Available in 214 colors!

The Ciao Marker range is geared towards the more inexperienced artists who haven’t worked with markers before. Their barrel body is a bit smaller and easier to grip, so they are a bit easier to handle by artists who aren’t used to this medium. The Ciao markers are also safe for use by young artists as the cap is choke-proof, the odor is low, and the ink conforms to the ASTM D-4236 standard. These markers are also double-ended and they are available in 180 colors.

The Copic Sketch Markers are a popular choice among professional illustrators and designers, as they boast a magnificent performance in all areas. Their two nibs are specifically cut in a more precision-focused shape, while their ink is formulated to dry quickly allowing professionals to produce work fast. The standard nib is a bit more flexible compared to the other Copic markers, so designers have some added freedom on their strokes. The flat barrel of the Sketch marker prevents the marker from rolling away, so it’s always in reach distance. The Sketch markers are available in the staggering number of 358 different colors! The Wide Copic Marker series is the only marker by Copic that doesn’t feature a double-ended design. Boasting a nib that is three times wider that the thick side of the regular Copic markers, this product is ideal for highlighting text or the covering of large areas. Each full stroke is almost an inch wide, while the tip ending offers a finer point that allows detailing as well. These very special markers are available in 36 carefully selected colors. The most important thing that you’ll have to consider when working with Copic markers is the paper that will take the ink. Copic markets two products namely the alcohol marker pads, and the sketchbooks.  Both offer perfectly smooth blending, crisp and sharp colors, and optimum whiteness.  A popular choice is made by Bee Paper, an acid free, ultra-smooth bleedproof pad.  Other sound choices include smooth surfaced white cardstock papers made by Bazzill Smoothies, Neenah, Prism, Georgia Pacific, Gina K., and Papertrey. Blending is one of the elements that make Copic markers so valuable and unique, so having many ways to practice it is a welcomed extra. Blending can be achieved by one of the following ways:

Being so great at layering makes Copic markers easy to work with when trying to shade. Here are some tips on doing it:

Learn how to Read the Copic Color Chart:

Copic markers can work well with other mediums like sketch pens and paint, but this isn’t always the case so you’ll have to try things and see how they work out for you, especially in the bleeding part. When it comes to stamping, Tsukineko Memento or Brilliance Ink, Ranger Distress Inks, A Muse Dye, and the Stewart Superior Palette Noire are known to work well with Copic markers. Alcohol-based markers are generally plagued by their coloring stability over time and Copic markers can’t stay away from this problem. This is reflected in their maximum life expectancy which is three years. If you want your Copic marker ink to stay on the paper unaffected for life, apply an oil-based topcoat finishing. 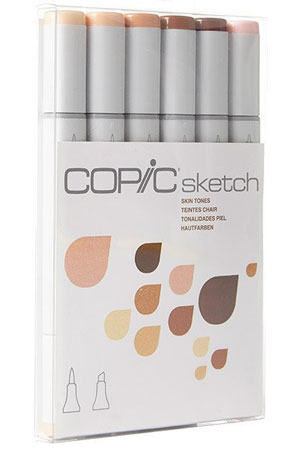 Packaged in a clear plastic case, a sketch set is the ideal way to begin or add to a marker collection. Refillable markers and replaceable nibs, compatible with copic air brush system. 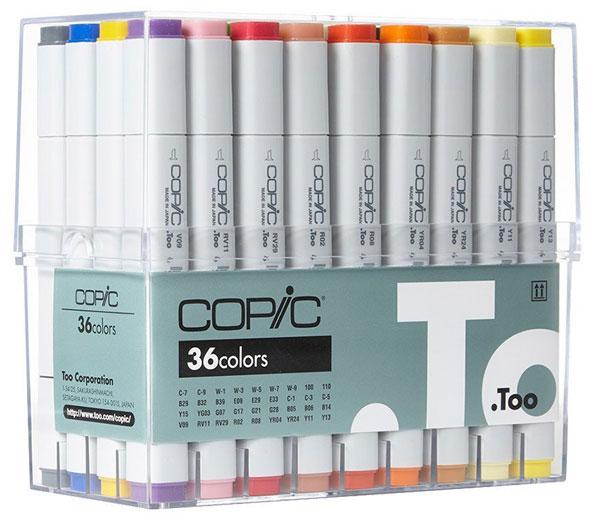 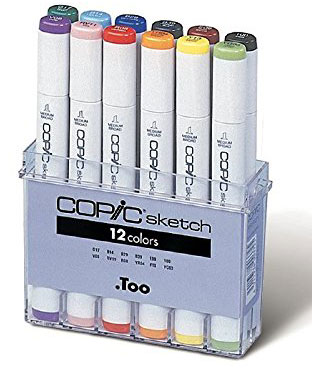 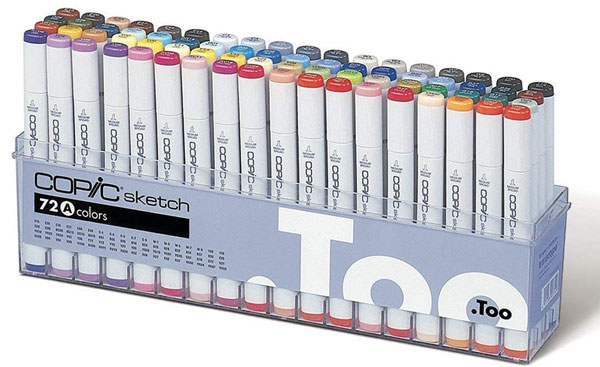 Sketch 72pc Set A. Scores of anime, manga and comics artists – as well as landscape, product, architecture and fashion designers.